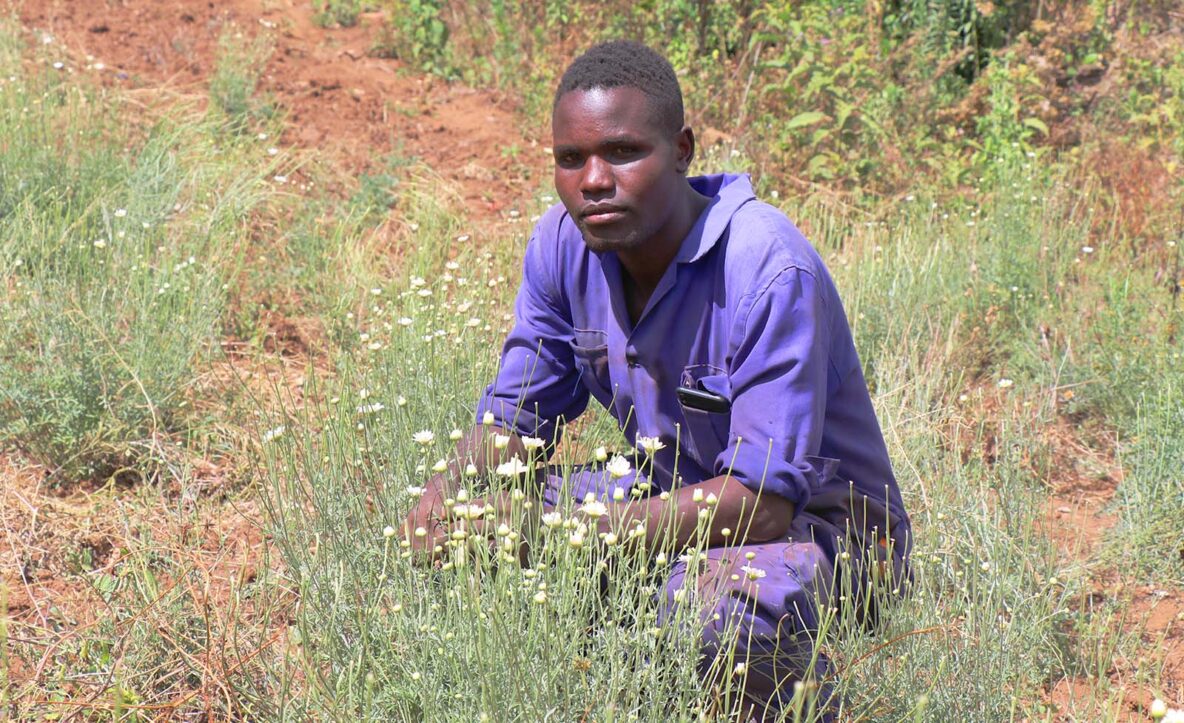 When Caleb Yegon was a child, he remembered his family farming pyrethrum.

The daisy-like flower that’s part of the Chrysanthemum family grew in a sectioned-off part of their small farm outside Molo in Nakuru County. It was a valuable crop, and provided his family with a cash income.

In the 1990s, Caleb’s parents were amongst nearly 200,000 small-scale growers of pyrethrum in Kenya. A flower used in pesticide production, it was Kenya’s third largest export crop, behind only coffee and tea. At one point, Kenya controlled over 90% of the world’s pyrethrum market.

The introduction of synthetic pesticides devastated Kenya’s indigenous pyrethrum trade. Prices paid for the dried flower collapsed, and by the early years of the new millennium, most growers had turned their land to other uses. Only a small number of diehard growers continued to produce the flower, and Kenya’s share of the global market fell to just 2%.

That situation has now changed again, and 26-year-old Caleb Yegon is at the vanguard of that change.

In recent years, the potentially harmful side effects of synthetic pesticides have become more widely understood, while the global marketplace has again turned to the small white petalled pyrethrum flower as a healthier and safer alternative for consumers.  Kenyan production of the crop has trebled.

Caleb was part of a recruitment drive undertaken by Kentegra Pyrethrum Company Ltd to identify growers in Nakuru, in early 2020. He signed up, and invested Ksh 800 (€7) in certified seed and seedlings, and began growing pyrethrum on a quarter acre plot. Caleb also received soil testing services from Crop Nutrition Laboratory Services Ltd (Cropnuts), whose role in the project is to offer advisory and soil test services for improved pyrethrum production.

Supported by the European Union and SlovakAid backed programme, the AgriFI Kenya Challenge Fund, Cropnuts has established an agri-clinic in Molo, Nakuru County, where it operates a soil testing lab that has to date provided soil tests and fertilizer recommendations to 3,000 of the targeted 5,000 pyrethrum farmers who are now working with Kentegra in Nakuru County. A mobile app has been devised that provides agronomic advice to farmers. The AgriFI Fund which is managed by Self Help Africa has also enabled Kentegra and Cropnuts to conduct field trials that they use for practical training of Kentegra agronomists and for improvement of fertilizer recommendations.

Kentegra collects pyrethrum flowers from smallholder farmers and processes them into Pale Refined Extract (PRE), the product required by the international organic pesticides and insecticides industry.  Improvements in the production systems for pyrethrum effected by Kentegra and Cropnuts show that the content of the active pesticide ingredient, pyrethrin, has increased from 1.2% to 1.59% in just a year.

Caleb had his soil tested in April 2021. The results revealed that the soil lacked nitrogen and he was therefore advised to apply Calcium Ammonium Nitrate (CAN).

Caleb Yegon now employs four part-time labourers on his small farm to assist him in harvesting the pyrethrum after which he dries it for three days depending on the weather.

The pyrethrum variety that he grows is drought resistant and produces flowers every two weeks for ten months, each year, and since he started harvesting in May 2021, he has sold 133kg of dried flower. Caleb says that he is paid KSH 200-230 (€1.55-1.78) per kilo, depending on the Pye content of his crop. Kentegra have selected this variety as it allows farmers to receive frequent payments, enticing them to plant more pyrethrum, and simultaneously protects their crops with the shorter growth cycle.

The income that he has earned from pyrethrum farming has enabled him to start building a new two-bedroom house for his young family.

“I love farming pyrethrum. I harvest every two weeks and get an income from it every month. This year, when I have harvested the maize on my farm I will expand the area I am using for pyrethrum. My plan is to grow it on one acre of my land,” he says.