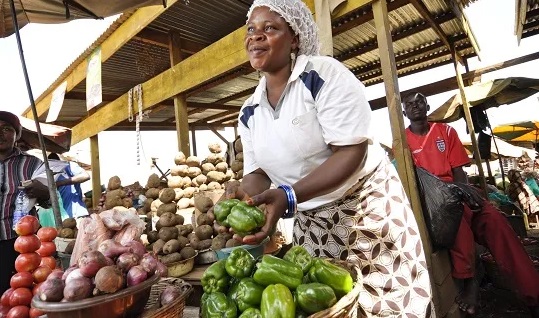 When Annmarie and Nancy Kathendu – the two sisters – walked to Nakumatt in 2014, they were attempting to disrupt a grocery market largely dominated by men. Armed with a cumulative four-decades of knowledge wealth in the C-suites across 30 countries, and insatiable desire to develop the community around Kieni Kia Ndege, in Meru County’s Igonji, the sister-couple has managed to penetrate the elusive club of Kenya’s biggest players in the supply chain ecosystem.

Annmarie and Nancy are the owners of Pick and Packed. PnP, as it is identified, is an agritech that works with farmers across the country by offering them a chance to market their produce. For that to happen, they must uphold the highest level of integrity in food production – the export quality level. PnP works with the farmers that adhere to these standards and offers them value addition options and ready market.

If you have eaten a banana, a mango, passion fruits, avocadoes, cabbages, watermelons and pawpaws from any supermarket around you in Kenya, there is a high probability Annmarie and Nancy sanctioned it. At PnP, onions are dressed, and tomatoes polished. “We make sure every fruit and vegetable that reaches your dining table has the highest safety standards,” shares Annmarie during a physical interview in Nairobi.

Annmarie has worked with Ernst&Young, PwC and IBM, while Nancy has lent her skills in civil engineering and banking industry for more than two decades across the world. “We are farmer-centric duo. When we retired, we decided to work with farmers around us by streamlining the supply chain challenges our farmers were going through,” says Annmarie.

That was in 2012. They initially did a two-year research, and after amassing data practices in the fruits and vegetable industry they launched operations in 2014 at their 10 acres farm in Igonji. So, when Annmarie and Nancy approached Nakumatt with a proposal to supply groceries – a proposal sauced with a powerpoint presentation – PnP walked out with a 50Kg order per two weeks. “Our first order was 50 kilos of grocery per every two weeks,” she recalls, a tinge of nostalgia evident on her face. Presently, PnP supplies 20 tonnes of produce daily to major retail outlets, marking it one of the largest players in the Kenyan agricultural supply ecosystem that contributes approximately 33 percent of Kenya’s Gross Domestic Product, and employs more than 40 percent and 70 percent of the total and rural population respectively.

Annmarie and Nancy – the two phenomenal women with grit and amiable persona – may have managed to penetrate the private sector supply chain system in the country. For women, this is not a walk in the park. The two sisters are part of the 3 per cent of the gender that the corporate Kenya is willing to outsource their services from. In a study published by IFC, women face unique barriers in outsourcing their services to private market that include limited access to capital, lack of access to resources to enhance operational capacity, limited access to networks, and having no platform on getting timely information on tenders.

When they surveyed 571 SMEs in Kenya, IFC found out that a third of the businesses were women-owned. Still, procurement opportunities tend to tilt towards men, and the women are left subcontracting and feeding on the crumbs. Researchers interviewed 14 Kenyan corporations and found they spend just 3 percent of their total procurement budget on women-owned businesses—and that women entrepreneurs are mostly represented in low-value sectors, such as catering, printing, and cleaning.

“Many face unique barriers that prevent them from achieving full potential, such as access to markets and critical assets such as finance, insurance and technology. IFC is working with partners to reduce this gender gap in Kenya and other markets,” says Amena Arif, IFC’s Country Manager for Kenya.

IFC commissioned the study – dubbed Sourcing2Equal Kenya: Barriers and Approaches to Increase Access to Markets for Women-Owned Businesses – as part of its wider efforts to connect women entrepreneurs to new markets. According to Ms Amena, women-owned business can play a key role in supplier diversity strategy. “It can potentially help firms access wider supplier base, improve quality of goods and services delivered, support competitive pricing, and manage other procurement related risks.”

The IFC study estimates that there is 41 per cent credit gap for Women SMEs (WSMEs) in Kenya, and only 20 per cent compared to 33 per cent of men are using internet, limiting their participation in e-commerce, which has gained much more importance since the pandemic. Most private institutions have existing regimes procurement policies and procedures that can sometimes create unintentional constraints for new women owned businesses that compete with large or already established existing suppliers. This can range from contractual payment terms to lack of public information available on the corporate’s binding processes. Also, firms find difficulties in finding compliant WSMEs in the market for direct tenders, and there is a perception by corporate buyers that women-owned businesses do not deliver on contracts once they are given the opportunity.

Jeremy Awori, Managing Director of Absa Bank Kenya, says that the lender conducted a similar study and found out one of the main issues plaguing women-owned businesses include accessing the supply chain financing such as credit. For example, he says, women only own 10 per cent of title deeds in Kenya, and it being a key consideration as a financing collateral shuts out 90 per cent of the women from competitive biddings.

Absa is seeking to empower a million women over the next five years through access to credit, deliberate setting aside some procurement for women, mentoring and coaching businesses, and enabling ease of access for information on tenders it is floating. “When we look at our gender agenda, the first priority is that this is something that has to be done. It is not a nice-to-do initiative. It is a must-to-do initiative. Half of the population are women, and by not looking at that in an economic perspective we are missing out,” says Mr Awori.

Annmarie says they built PnP with their savings, and communal support from the local leaders. It was not easy to access credit then, even worse for women due to societal norms. PnP’s success was also attributed to starting small and gradually scaling the brand. “There was no income pressure. In fact, at the very beginning we would encourage our women partners in the village to open bank accounts in order to build their credit capacity,” she says.

In October 2013, President Uhuru Kenyatta’s government introduced a policy that stipulates that 30 percent of the value of all government procurement contracts be awarded to small businesses owned by either women, persons with disabilities, or young people between the age of 18 and 35. Rebecca Miano, Managing Director, KenGen says women account for 55 per cent of procurement set aside for this category in her firm as a measure of supporting inclusivity and diversity. KenGen is the Kenya’s largest electric power producer, producing over 65 per cent of the electricity consumed in the country, and is owned by the government. “Over the years, this category has supplied tenders worth less than a billion, and for the 21/22 financial year, it stands at Kshs6 billion. If women continue to partake 55 per cent of this, KenGen expects Kshs3.3 Billion to go to women suppliers,” she added.

The Covid-19 pandemic has brought to light the importance of buyers to build diverse supply chain to mitigate operational risks dependencies on a handful of suppliers, says Mary Porter Peschka, ESG Sustainability Advice & Solutions Director at the IFC. By enabling women to participate more in the economic health of a country, it aids in resilience and recovery from the pandemic.

“When women have equal opportunities as men, companies are able to strengthen their supply base, improve human capital, and unlock growth and innovation. Building a diverse supply chain is even more crucial for business sustainability, resilience and growth post-crisis,” says Ms Peschka.

It is easy to see why. Since PnP was introduced in Igonji, Annemarie says they have introduced a circular economy model where the waste becomes an input, minimising overall waste. Women staff used to tag along their husbands during pay day, as it was not a common sight for a woman to have a bank account. This is not the case anymore, as they are well versed in all matters independence. “We insisted for the women to open the bank accounts and create a healthy credit score. Other businesses grew as women became empowered and were able to optimally support their respective households,” she adds.

Through a grant from the AgriFI Kenya Challenge Fund, a programme by Self Help Africa – an international development charity with an expertise in farming – and funded by the European Union and SlovakAid, PnP has set up a Centre of Excellence in Embu. The facility offers farmers access to agronomists, pesticide management experts, irrigation experts and modern farming techniques for the local market. In the near future, PnP seeks to set other centres in Kiambu and Machakos counties. “There is a local deficit for quality vegetables and fruits, and through these facilities, we are able to empower local farmers,” says Annmarie.

According to Self Help Africa, women produce up to 70 per cent of the food grown on small farms in Africa. In spite of this, an average African woman will receive just a fraction of the support available to men. As a result, their farms can be 20-40 per cent less productive. “Through the Centre of Excellence, we are able to help farmers diversify their farm activities in some way, increasing households ability to cope with shocks – climatic, social, environmental or economic. Over 55 per cent of all of the people we have supported in our projects are women,” says Fredrick Wanzala, a Portfolio Manager at Self Help Africa.

Since 2020 – when the vagaries of the Covid-19 virus were largely felt – the economic gap between men and women was exacerbated, which threatens decades of progress for gender equality. Before the pandemic, the world was losing $172 trillion because of differences in lifetime earnings between women and men, according to a Worldbank study. Businesses owned by women lost over 50 per cent of their revenues during the pandemic, and according to IFC estimates, this was significantly larger than men.

If the private sector deliberately enables inclusion in supply chain, the market will foster innovation and agility as diverse suppliers bring diversity of thoughts. It also complements the country’s sustainability and diversity inclusion initiatives by enhancing the livelihoods. “We need to be more deliberate both as government and the private sector, civil society to ensure we are realising and making diversity and inclusion an integral part of the fabric of the society,” signs off Eva Muraya, the Director of Gender and SMEs at the Kenya Private Sector Alliance (KEPSA).