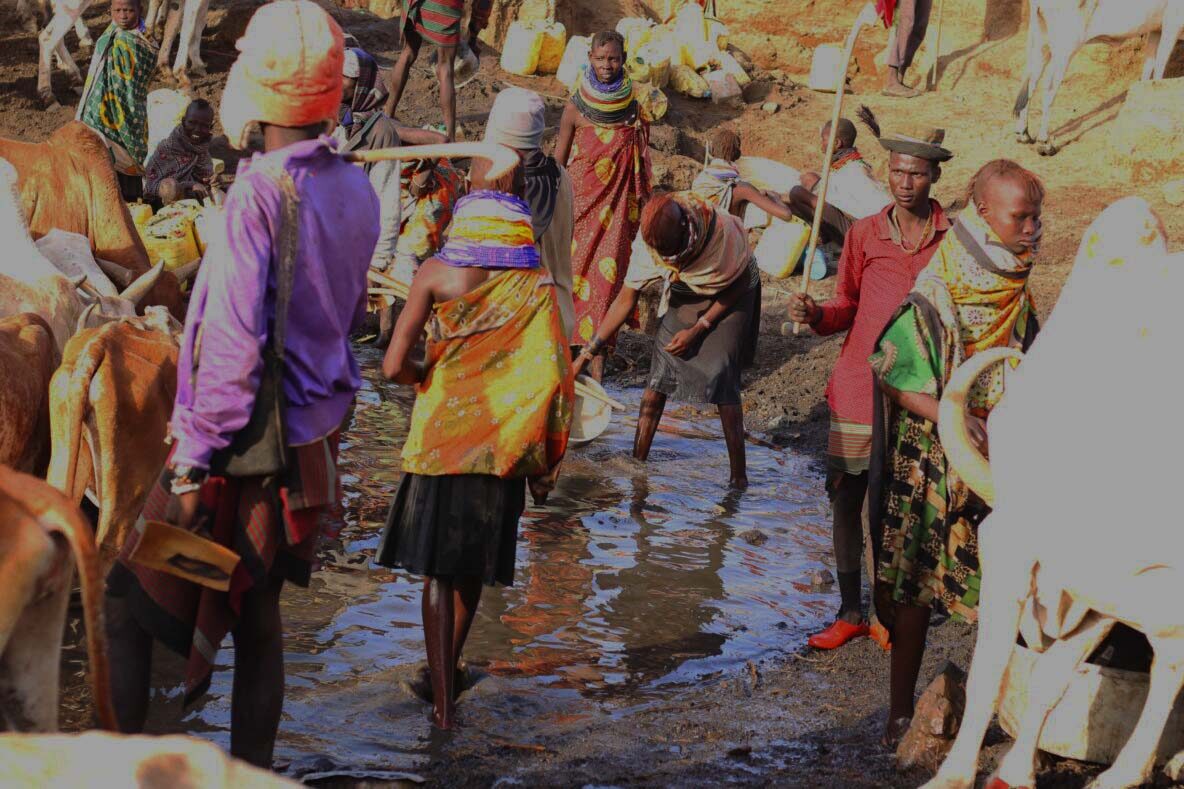 On an afternoon at Lorus plains close to Kenya’s border with South Sudan, temperatures soared close to 40 degrees Celsius. Hundreds of livestock jostled for a chance to drink from a shallow well as herders worked hard to control them. One scoop after another, young men and women filled rusty troughs for the thirsty cattle to drink from. It was dusty and noisy from all the herding calls, shouts, moos and bleats renting the air.

The shallow well at Lorus is a savior for hundreds of herders and thousands of livestock, the last option for residents of the entire Lorus and neighboring Lotikipi. Many herders and entire households have moved there in search of pasture and water with what remains of their herds following a deadly prolonged drought.

All along the dusty road from Lotikipi to Lorus and around the shallow well were strewn with carcasses of livestock. They all died of diseases and the lack of pasture and water. A few sheep lay close to the well-awaiting death, too weak to move.

Drought has worsened in Kenya and most parts of East Africa and the Horn badly affecting the lives of nomadic pastoralists. One of the main challenges that has come with effects of climate change is an increase in diseases coupled with the lack of access to veterinary services. The government is also enforcing a demand by law that vet services be offered by professionals, locking out the often lay, community-based animal health workers who have in the past offered basic vet services.

Among the hundreds of livestock at the shallow well in Lorus that afternoon were John Losikiria’s. He is a resident of the neighboring Lotikipi location. Since the rains failed last November and December, he has lost dozens of sheep and goats and a few cattle. Most of his livestock died of foot and mouth disease. “During the drought, we also experience a lot of livestock diseases because many livestock meet and some of them would be having diseases. Meeting here at the watering hole has led to increased diseases. Donkeys die, camels die, cattle die and even now there is an outbreak of foot and mouth in this area,” said Losikiria.

Turkana County, like other counties in the arid and semi-arid areas in Kenya’s north is vast and accessibility by road is difficult. Development in these counties has lagged behind since independence as compared to the southern counties. Access to services for people living in these counties has also been low and according to a study titled Rural development and marginalization: The drylands of northern Kenya, the north has a history of marginalization which can be traced to the colonial era.

Until now, NGO’s still offer majority of livestock services in Kenya’s north. Recently, Paves Vetagro Limited (Paves Vetagro), a company that distributes animal health products received funding from the AgriFI Kenya Challenge Fund which is managed by Self Help Africa and funded by the European Union and SlovakAid to increase access to veterinary services in West Pokot and Turkana. The development sector has invested a lot in the livestock and disease area but it is an area where the private sector would not be keen to invest in because it is a high-risk area,” said Dennis Mayaka, a Senior Portfolio Manager at Self Help Africa.

In a bid to achieve this, the AgriFI Kenya Challenge Fund is supporting Paves Vetagro to deliver animal health products to places that had no access before and is training lay people to handle medicine for selected diseases. This has enabled many livestock farmers to easily get medicine for their livestock in case of a disease or an outbreak. “Our business premise is based on how to get our services to these hard-to-reach areas hence the issue of satellite branches, mobile vans and training of community members and engaging them to be agro-dealers and engaging paravets to work within the communities,” said Dr. Benson Ririmpoi the Managing Director of Paves Vetagro.

The strategy has worked, according to Ririmpoi, and they were able to deliver more drugs and treat more livestock in the area.

Diseases were a great nuisance but when Paves brought medicine closer, these cattle and sheep really benefited. Since then, I have increased the size of my cattle pen – Samuel Lopira.

In Litei village in West Pokot, a few kilometers from the border with Uganda, Samuel Lopira doesn’t have to worry about access to livestock medicine anymore. He recalls a time when he lost his cattle to tick-borne (Bovine Babesiosis) and tsetse fly-borne diseases (Tryopanasomiasis). He would, sometimes, travel close to one hundred kilometers to Makutano (near Kapenguria) in search of medicine. He lost many animals to diseases. “Diseases were a great nuisance but when Paves brought medicine closer, these cattle and sheep really benefited. Since then, I have increased the size of my cattle pen,” he said.

Now, when Lopira wants to deworm or treat his livestock, he goes to Konyao shopping center where Paves Vetagro has set up a shop that sells animal health products. It is here that Irene Yatodo, a trained veterinary para-professional works. She helps treat livestock for farmers around Konyao as long as they buy medicine from Paves Vetagro. “When a client comes and tells me that his cow is sick, I will accompany him to go anddiagnose and treat especially if it is within this area but I can’t go too far,” she said. With support from AgriFI, Paves Vetagro set up two agrovet input distribution and training centres, in Konyao and Ortum. The Konyao centre serves farmers and agrodealers in Pokot North sub-county as well as beneficiaries in Eastern Uganda; the outlet is only 8km from the Ugandan border. 50 agrodealers operate from the Konyao centre, serving beneficiaries within an estimated radius of 300km of the shop.

In Kalobeyei center in Turkana, Lopur Silale runs a small agrovet. While he isn’t a registered professional, he has been trained by Paves Vetagro which also supplies him with animal health products. He has also been trained by other NGO’s and has been selling animal health products for ten years. “I have been trained by many organizations including the county government. After receiving the skills in animal health, I opened this shop,” he said. For a long time, Silale was faced with the challenge of stocking his shop as the closest centre he would access was Kakuma where the prices were prohibitive. He was delighted when in 2021 Paves Vetagro began making direct deliveries to his shop and offered him training.

The Kenya Veterinary Board has moved to implement the restriction of veterinary practice to veterinarians and veterinary paraprofessionals, locking out more training of people like Silale. “Due to this, we had to stop the training of lay people but continued with the ones we had and maximized on delivering to agrovets and developing new routes,” said Dr Ririmpoi.

A law which established the Kenya Veterinary Board was passed and the government started enforcing adherence to quality veterinary services standards offered by qualified professionals. The Board registers vets and paravets across the country who then go ahead and practice under the county governments or privately.

The absence of the often-lay community-based animal health workers is a lack of vet services in these areas causing more losses to herders. Agriculture is a function that has been devolved to the local governments in Kenya. However, in most counties, agricultural extension officers and veterinary officers are seldom found in the field. Losikiria for instance had not seen any veterinary officer visiting Lorus to treat the livestock despite the disease outbreak.